Searching for the Ghost of Tom Joad 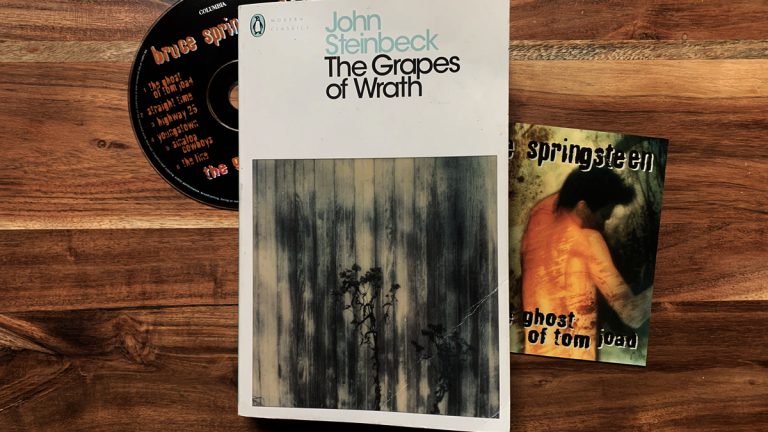 As a Bruce Springsteen fan, I’ve always hummed “The Ghost of Tom Joad”. I usually sing it on rainy days, lost in my thoughts. I was always too enchanted by the melody to concentrate on the text. This spring though, during the lockdown, I finally asked myself the question: who is Tom Joad?

Thus, I discovered that Tom Joad is the protagonist of John Steinback’s book The Grapes of Wrath. It was only a matter of time before the book appeared in my library.

The Grapes of Wrath plot summary

The Grapes of Wrath tells the story of the Joads, a peasant family whose land is expropriated. Threatened by the banks and crushed by drought and adverse weather, they decide to leave. They gather what little money they have left, buy a ramshackle truck, and leave Oklahoma. They cross the desert along the torrid Route 66 driving towards the mirage of the promised land, California. There, they are sure, they will find a job in fruit picking.
Together with the Joad family, thousands of families leave their land and, on the road to fortune, end up in a whirlwind of misery.

Some facts on The Grapes of Wrath by John Steinbeck

Released on April 14, 1939, The Grapes of Wrath was an instant success with audiences but was also harshly criticized. Steinbeck wrote it with the intention of shaming those responsible for the Great Depression, and it actually bothered more than a few. Clearly written to be on the side of the weak and migrants, The Grapes of Wrath was censored on several occasions by various states, including Mussolini’s Italy.

Reading The Grapes of Wrath

The Grapes of Wrath was a difficult book to read in many ways. Primarily for the language. I am used to reading in English, I struggled a lot with this book. The author identified with his semi-illiterate characters and the book is written accordingly.
Then there was the moral difficulty. Discomfort, injustice, resignation, and anger. These were the feelings I had while reading. Despite the perseverance of the Joad family, it is clear to the reader from the first chapters that their story will not have a happy ending. The reader is a powerless spectator who can only witness, resigned, the Joads’ vain attempts at improvement. As if to remember that no matter how hard a person may try, things don’t always go as they should.

The Grapes of Wrath is a book that certainly speaks to the “poor”, telling about their condition and putting itself on their side. But it also speaks to those who have the money, moving their conscience.

What if The Grapes of Wrath was published today?

Reading the book and the controversies related to it, I often thought that if our politicians read more, The Grapes of Wrath would still be able to stir up some criticism.

It is a dangerous weapon, to make people understand that the enemy is not bad but simply desperate.

Probably what happened to the Joad family is the same thing that happens to many modern refugee families. We are California and, just like California, we are no one’s promised land.
It was impossible not to notice the similarities between many of the 2021 news reports and Steinback’s words.

Very often I would have liked to enter history, stand in the middle of the road, block their truck and tell them that the promised land if it ever exists, is somewhere else.
Unfortunately, it is not allowed to intervene. One can only sit “down here in the campfire light, searchin’ for the ghost of Tom Joad.” In a sexist world, speaking up is still the most revolutionary thing a woman can do. In her book "Stai Zitta" Italian activist and Author Michela Murgia lists the nine sentences that women are tired of hearing (and saying).