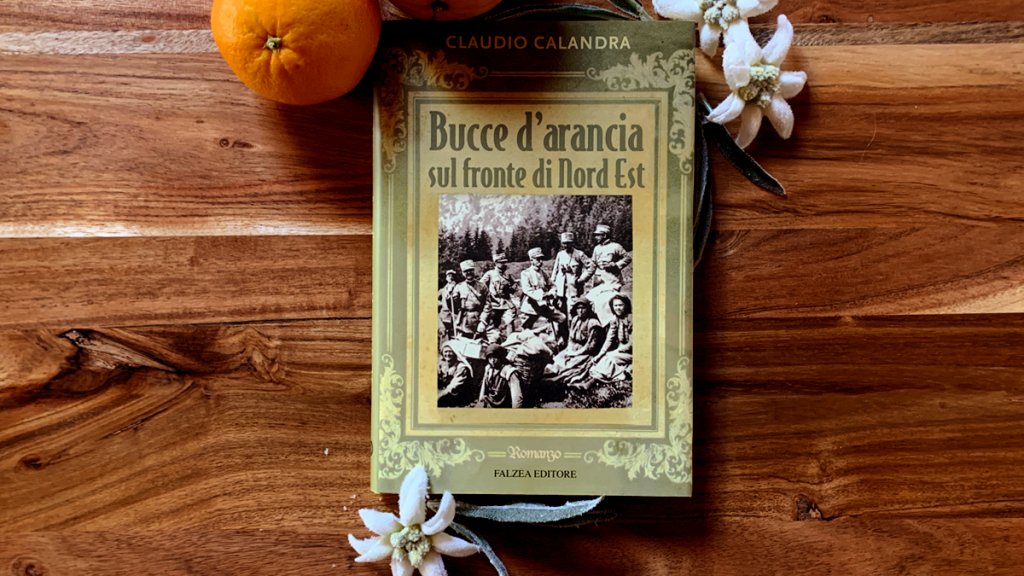 When I published the book review of Fiore di Roccia by Ilaria Tuti, I would have never expected the message I received. One late-October evening, Claudio Calandra contacted me on Facebook to report to me his book “Bucce d’arancia sul fronte di Nord Est” (Orange peels on the North Eastern front).

As I stared at the cover, I was sure I had already read the book. After a quick search in my book diary (yes, besides the mountain diary I also keep one for books), I’m taken back to my first encounter with Tano and Sciulin. A gathering that took place in 2011 thanks to Calandra’s book, which I own autographed.

First World War. Italy enters World War I and Tano, a twenty-year-old boy from Caltagirone, Sicily, leaves for the front located in a remote area far north.
Carnia. Even in its name, this area of Friuli-Venezia Giulia on the border with Austria sounds sharp and scratchy like a rock.
Tano’s family is not supportive. His parents entrust the fate of the shop to him, the only male heir. What do we have to do with the war up there? asks Don Vito, Tano’s father, before the boy leaves. After all, for Sicily, “up there” it is not even marked on the geographical maps of a then nonexistent Italy.

Tano arrives at the front after an exhausting four-day journey. He’s scared but also aware that the destiny of his homeland is in his hands and that he must shape it like clay.

Life at the front immediately sucks Tano in. He becomes a cyclist letter carrier and builds solid relationships with the introverted inhabitants of Carnia.
Pre Florio, wise curate of Timau, is an irreplaceable confidant but among all the creatures of the north, none is more mythological than the Carnic Carriers.
Girls and women who carry in their panniers food and ammunition for the men in the trenches. Out of all the Portatrici Carniche a stubborn sixteen-year-old from Timau stands out in the heart of Tano.
Tano and Sciulin’s love story is a sweet note between the roar of the cannons. Their love develops in a delicate and persistent way, like the scent of orange peels on the hot stove.

Despite having a grandmother born in 1921 who is still able to narrate her life in WW2, the stories about the Carnic Carriers are the ones that move me most.
Perhaps, given my passion for trekking and the closeness of age with those who were carriers, it is easier for me to identify with them.
Or maybe, reading about their deeds, I also question myself and wonder if I would ever be capable of such a spirit of resilience and dedication.

Fiore di Roccia by Ilaria Tuti focuses on identification. The reader’s breath joins that of the protagonist, Agata, and follows her, like an insect, along the slopes of Mount Pal Piccolo and in the narrow darkness of the trenches. With Claudio Calandra’s book, one gets to fly over the entire scenery like spectators. A life made up of soldiers, but also of civilians. From death and love. Mourning and life. Justices and injustices.
The fantastic, but normal, love story between Tano and Sciulin intersects with that of real facts and characters. Pre Floreano Dorotea, curate of Timau, and Don Luigi Sturzo are historical characters. As well as the most famous of the Carnic Carriers, Maria Plotzil Lentil.

Personally, I would have appreciated a longer description of places and characters, but I understand the author’s desire to concentrate in two hundred pages on what is important to know about the history of the Carnic Carriers.
If, on the one hand, this novel set in Friuli-Venezia Giulia makes me proud because it reveals the best sides of the Friulian people, on the other, it leaves me a little bitter.

The books that tell a hidden story

It is said that to build Italy, unite the Italians and, I add, create Europe, it took two world wars and exodus like Tano’s.
After the visit to the Pal Piccolo, I thus wonder what remains of that sacrifice made many years ago. The answer that I would give at first glance, in this precise historical moment of the global pandemic, is dry: nothing.
There would be much to learn from the Carnic Carriers. In addition to resilience, we could learn the idea of collective good that overcomes the selfish needs of the individual. Perhaps, the history of the carriers is kept quiet for this very reason.

Books like Calandra’s present us with a reality that brings us “moderns” out in a way that is anything but flattering.