International Women's Day 2021 - The best gift is a book 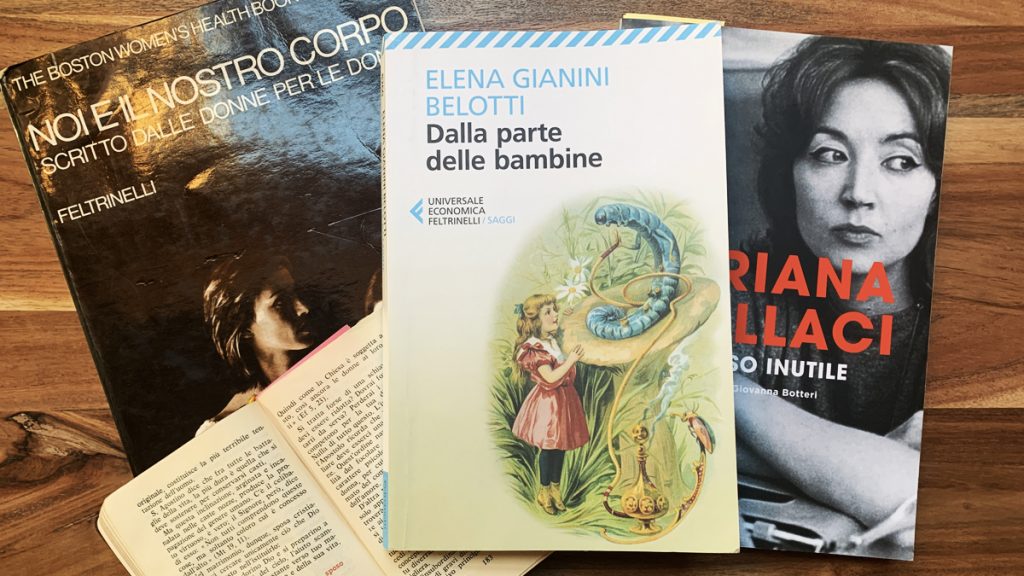 As a bookworm, I think that no gift is better than books. Donating books is an act of love.

That’s why on International Women’s Day, I want to share with you a book that I came to value as one of the most precious of my library.
If you’re around thirty like me, if you have a child or even if you’re thinking about it, you should read this book. If you’re a woman this book is mandatory.
If you’re older, you should read it to realize the way you’ve been brought up.
If you’re a man, I strongly advise you to read this book to understand women. To stand up for women and to raise better children.

“Dalla parte delle bambine” (On girls’s side) is an essay by Italian author Elena Gianini Belotti. I’m not sure that you will be able to find it in English, however, if you have the chance of reading it, please do.

Written in 1973, the book analyzes the way in which girls are brought up in comparison to boys.

The author notices how, even before conception, girls are seen as the inferior sex. If a couple is not able to conceive a male heir, for example, the blame is usually on the woman. Of course, we know that it is the man’s sperm that determines the sex of the newborn. But that doesn’t stop us from hearing and accepting sentences like “My wife was not able to give me a male heir“.

As children grow up, boys are encouraged to be more active and aggressive while girls are taught that they should be quiet, calm, and resilient. Boys are given weapons and tools to play with, girls are gifted with flat irons and mops. Boys are allowed to wear tracksuits and feel comfortable. Girls can also wear tracksuits, but they’re constantly reminded that they should dress feminine and prefer skirts. If boys are to dominate the counterpart must be willing to be dominated. The message is clear and gets perpetuated in kindergarten and in school until girls are tamed.

While reading this essay by Elena Gianini Belotti, I often compared her words to my own upbringing. At first, it seemed that the thesis presented by the author was more than solved by the time I was born, 18 years later. My parents, after all, refused to know my sex until I was born. “We didn’t care if you were a boy or a girl, we just wanted you to be healthy.” My parents always told me.
But then, as I read on, I realized that almost everything the author wrote could be applied to my school years. In kindergarten, I love to climb trees and outdoor games. Yet if you had asked me about my favorite way to dress, I would have replied “fancy formal dresses”.

I remember the way in which my elementary school teacher used to say to my mum that I was a volcano. I was energetic, I was a leader, I was talkative, I was a volcano of ideas. But the teacher’s comparison wasn’t meant in a positive sense. Eventually, the volcano cooled down, but now I wonder, was it really that bad? Would have the teacher said the same if I were a boy. Why couldn’t she praise my qualities?

The answer came from another book I received from the hands of a relative. The book dates back to 1965 and it was donated on the occasion of my relative’s wedding. She was the bride, and the book was titled “The Christian Spouse”.
It was a manual for the perfect newlywed bride. Among prayers, the book lists a series of duties that are expected from the woman. The first and the most important is to be submissive to the man. To limit and annihilate one’s tastes and likings. To stay silent in case of violence.

This book isn’t old. My mom was born in 1965, these were the rules that part of the society required from women. She could have easily taught them to me.

It was weird reading the two books contemporarily. Identical topics were treated in opposite ways. What “The Christian spouse” built up, “Dalla parte delle bambine” torn down demonstrating how stupid such beliefs were and still are. The latter book is a product of the 70s and I’m thankful for the women that in those years found the courage to fight society and culture. Their battles made it possible for me to study, live with my boyfriend unmarried and ask for contraceptives without shame.

Are we leaving a better world for future women? Slowly but surely, we are. We’re fighting to stop catcalling, slut-shaming ad victim-blaming. We’re working but I’m sure we could do more.
If you’re a woman, the best thing you can do today is to be proactive in changing the world. Because the world can change only if we do. Read, talk with other women, share your voice, create community. Treat girls in a way they feel encouraged to live their life as they wish and not as a “good girl” is supposed to do. If you’re a mom of a boy, raise him to be the boy girls can feel safe with.

If you’re a man, listen to the women in your life and for international women’s day, day help them fight for their rights. If you hear a friend of yours disrespecting women, have the courage to face him and invite him to change his behavior.

On the edge of 30, now more than ever, I feel it’s my duty to change the world and this cause is the dearest to my heart.

I hope my gift for International Women’s Day makes you think. I hope you can think about your life and mend society’s wrongs with future generations. I hope it gives you the strength to emerge from any difficulties to reach endless successes.

If you can speak Italian, I’ve talked about it on my Instagram profile: