The Useless Sex by Oriana Fallaci 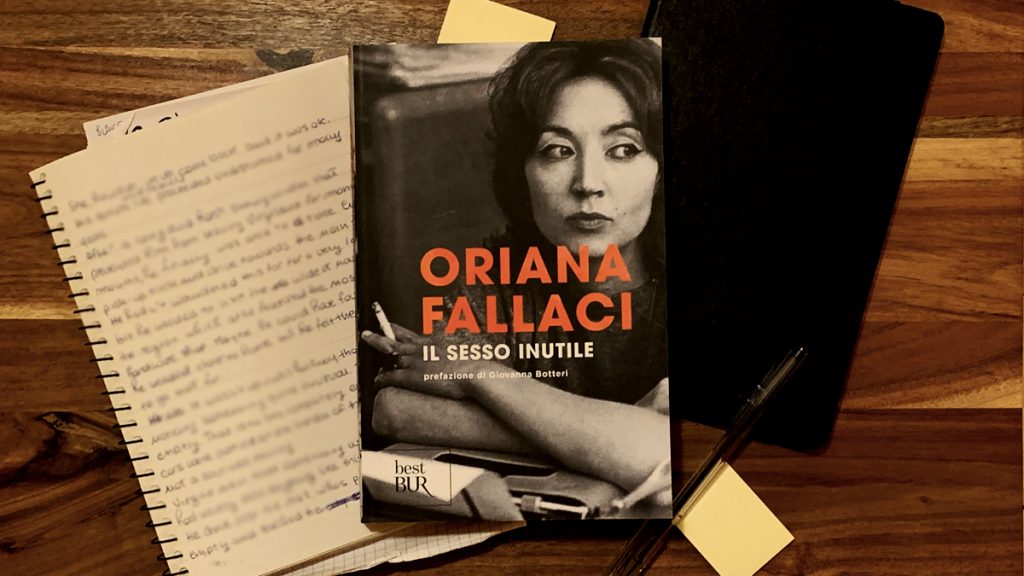 “Do you feel happier thinking that you can do what men do and even become President? God, how I wish I was born in one of those countries where women have no worth. Ours is a useless sex anyway.”

We’re in 1961 and Italian author Oriana Fallaci writes for the magazine “L’Europeo” when her editor asks her to write a reportage on women. She is skeptical. Is this really useful? she asks herself. Women are not a special breed, after all.
It’s the quote above, spoken by a friend at dinner, that convinces her to leave. She realizes that “men’s problems start from economical, racial or social matters. But women’s problems start from being women.”

Oriana Fallaci concludes her trip in New York and it’s like returning to the starting point. In the western world, women must act like men to be taken seriously.

Are women still the useless sex?

I loved this book for two reasons.
This is the second book by Oriana Fallaci that I read while in lockdown.
In March 2020 I read Insciallah but the serious topic of the novel did not make a good match with being a prisoner in my own home.

“The useless sex” is a mind-travel. Oriana Fallaci’s writing style is vivid and descriptive and it’s almost like being right there with her through the whole trip.
I must admit that the feeling was bittersweet because, as of January 2021, I still have no clue on when we’ll be allowed to travel light-heartedly again.

And then there’s the theme of the book. Women and happiness. While reading, I’ve asked myself quite a few times if ours is still the useless sex.
The answer I gave myself is not the one I’d wished for. I would have liked to reply. “Of course not! It’s 2021!”
Instead, Oriana’s words were so immersive and current that I had to force me to remember that the book was written in 1961. The thought flashed into my mind like a comet, and it felt like waking up all of a sudden after dozing off.

I finished the book while on lunch break and immediately after I went for a walk. While preparing, I heard Fallaci’s words in my mind. I imagined having a conversation with her to tell her that, 60 years later, everything had changed.
Then I walked out and played Spotify randomly. The first song to stream was “The Man” by Taylor Swift. I quote.

They’d say I hustled,
Put in the work
They wouldn’t shake their heads and question how much of this I deserve
What I was wearing
If I was rude
Could all be separated from my good ideas and power moves?
[…]
I’m so sick of running as fast I can
Wondering if I’d get there quicker
If I was a man
And I’m so sick of them coming at me again
‘Cause if I was a man
Then I’d be the man

The truth is, that it’s 2021 and women are still the useless sex and we’re still bound to unhappiness. Not for a lack of means or intelligence but because we’re still overwhelmed by a sexist culture.
Taking inspiration from Oriana’s title, we could say that our sex is “Useful as long as…”.

We’re useful as long as…

I’m on the edge of being 30 and it’s time I decide if I want to be a mother or not. I confess that I feel a lot of responsibility. I know that if I’ll ever decide to have a child, it won’t be easy. I was never very motherly, but I must admit that it thrills me to think that I could grow a new human being to be better than I ever was. And if that human being should ever be male, I’d like to grow a man that can take advantage of his “useful sex” to make the world a happier place for women.

I’ve let my thoughts wander way too much. I know this goes way beyond a simple book review. But that’s the power of books and of mountain huts (whether they are real or imaginary). They can make you think. And no matter how much snow should fall outside my mountain hut, my door will always be open to thoughts and growth.